It was a usual Sunday morning and I had my Maths class test (I had studied for this one). It is the beginning of class 12th and we are all on this study spree regarding this whole CBSE Board thing. I am not the one who usually studies for a Maths class test but this time it was different. Since the past two weeks I had been in a deplorable academic condition. All these days I used to sit in the class and stare blankly at the blackboard trying to fathom what the teachers wrote. All I could still fathom was that I was a loser. Absolutely. Completely. One part of me cursed the education system and just wanted to write multiple poems to the non-existent love of my life while the other half nudged my loser self to work hard in order to achieve my long-lost dreams. In short, I was constantly at war with myself.

With all these thoughts playing in the back of my mind, I completed the math test way ahead of time. I submitted my sheet and glanced back at my friends who were furiously stabbing their answer sheets and I knew better than to wait for them to finish. So I went out, alone. I had a lot of time in hand and as I had mentioned earlier, it was a Sunday morning. Cold winds, seclusion and stuff. A solitary walk was needed. High time. So I started walking. I had no idea where to go but I wanted to reach as soon as possible. I had long been in search of a parallel universe, or maybe the fourth-dimension. I just wanted to be somewhere else, somewhere better. I wanted to explore. But before that, perhaps, all I needed was to find myself. Explore myself.

While I was walking, the first drops of drizzle touched my palm. Unnerved, I kept walking. I saw a man fixing the chains of his bicycle. I couldn't have been of any help. Loser. I kept walking and reached a familiar road.  I remembered how I used to walk here and listen to Tum Se Hi with Tanya. She was probably still stabbing her answer sheets right now. I put the thought away and started walking swiftly. I came to a sudden halt in front of an old park which was almost to ruins. Due to the recent turmoil of bad weather, a few trees had fallen in the middle of the park which blocked the inside view. I kicked a few bushes off the entrance and went inside. Thankfully, one of the benches, though muddy, was still intact. The fallen trees provided a kind of enclosure and blocked this spot entirely out of public view. Relived, I sat down.

For a moment, I sat there emotion-less. And then it happened. Tears trickled down my face beating the speed of the ongoing drizzle and soon I was exhausted and choked. But when I stopped and wiped my tears away, I swear, I had found myself. This was the place. I picked up my phone wanting to listen to some radio but realized I never brought earphones to the math class. Then I saw my register. And my pen. Bliss was never so exquisite. It was the end to my month-long block and I kept writing until I had nothing more to say. It felt as if a big burden was hustled off my shoulders. I felt light as a bubble, ready to float around without the fear of being pricked.

I saw that my phone was vibrating. It was Arunma’s call. They had finished the test. I got up to walk back. But I was different now, no longer the same person who wanted to run away. Now I had the courage to bounce back, and fight. 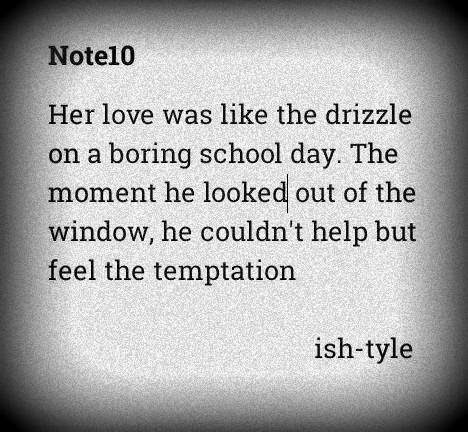